Apple has long restricted marijuana companies from conducting business on its app store. But following a recent policy change, the cannabis delivery service Eaze on Thursday announced that consumers can now shop and pay for marijuana products on its iPhone app for the first time.

This marks a “major milestone for the legal cannabis market and consumers,” Eaze said in a press release. “The Eaze app allows customers to complete all aspects of delivery seamlessly: registration, ID verification, product selection, payment, and receipt to the doorstep.” 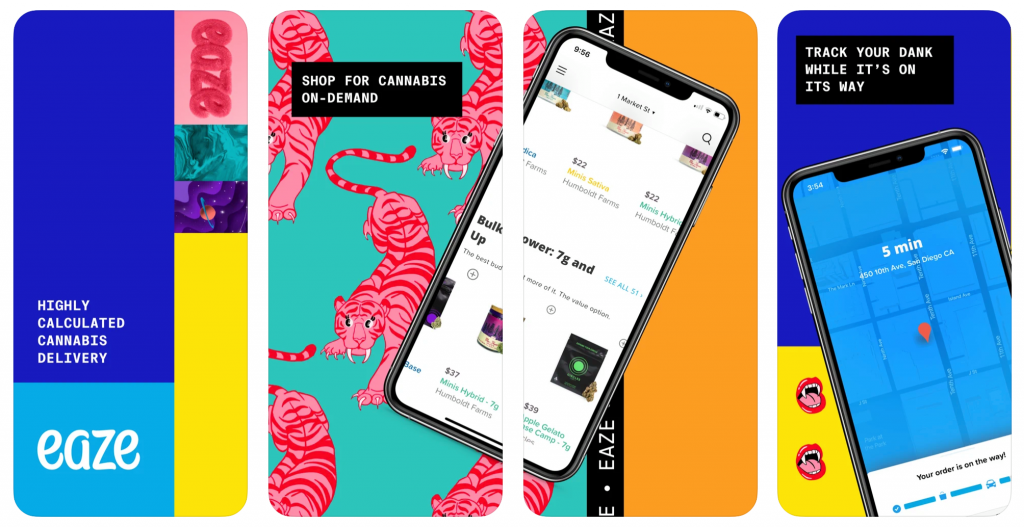 Previously, people buying marijuana through the nation’s largest cannabis delivery service had to leave the prior version of the app and submit orders through a less-convenient mobile version of the company’s web page. The Apple policy change means the service is streamlined, and it represents a significant development in the evolving relationship between Big Tech and the marijuana industry.

“Eaze has always been about using the latest developments in technology to make shopping for legal cannabis more accessible,” CEO Rogelio Choy said. “It’s hard to overstate how important this is to our company and the industry. It’s deeply gratifying to launch the Apple Store’s first fully-functional cannabis delivery app, making it even easier for our two million registered customers to legally consume.”

In contrast to Apple, Google’s Android app hub updated its policy in 2019 to explicitly prohibit programs that connect users with cannabis, no matter whether it is legal in the jurisdiction where the user lives.

“We don’t allow apps that facilitate the sale of marijuana or marijuana products, regardless of legality,” it says, adding that some examples of violations would be “allowing users to order marijuana through an in-app shopping cart feature” or “assisting users in arranging delivery or pick up of marijuana.”

Eaze Distinguished Engineer CJ Silverio said that the “flexibility and depth of our technical team allowed us to respond immediately to the changes in Apple’s policy, and create an app that offers our customers the ideal experience for cannabis delivery.”

Chris Vaughn, CEO of the California delivery service Emjay, previously told WeedWeek that he believes Apple’s decision was informed by the continuing legalization movement in states like New York, as well as Amazon’s recent announcement that it will no longer be drug testing workers for cannabis in addition to lobbying for a federal legalization bill. He added that he thinks Google will “follow quickly” to update its own policies.

The tech industry has had a strained relationship with the marijuana industry, even as a growing number of states have decided to legalize and regulate the sale of cannabis.

Facebook, which in 2019 showed off its artificial intelligence technology that’s capable of identifying images of marijuana, continues to prohibit the commercial advertising of cannabis products, regardless of the legality of the business under state law.

Noncommercial cannabis news sites such as Marijuana Moment and state regulatory bodies like the Massachusetts Cannabis Control Commission have also been caught up in the anti-marijuana policy despite the fact that they do not promote or sell cannabis products. In some cases, it appears these organizations have been hidden from appearing in search results—a practice known as “shadowbanning.”

Despite marijuana firms being banned from Google’s app market, some of the company’s top officials seem pretty bullish about loosening cannabis laws. Google co-founder Sergey Brin joked about supplying employees with joints at a post-election meeting in 2016.

“I was asking if we could serve joints outside on the patio, but apparently these things take a little while to take effect,” Brin said, referring to the implementation of California’s cannabis legalization measure. “It was a huge, huge disappointment. I’ve been bemoaning that all week, I’ll be honest with you.”

Marijuana Moment is made possible with support from readers. If you rely on our cannabis advocacy journalism to stay informed, please consider a monthly Patreon pledge.

Tuesday morning the Supreme Court of Texas heard oral arguments on smokable hemp ban put in place by both HB 1325 and Department of State Hea...

END_OF_DOCUMENT_TOKEN_TO_BE_REPLACED

Austin, Texas, USA at the Texas State Capitol at dusk. The Texas Supreme Court is set to hear oral arguments on the smokable hemp ban lawsuit ...

END_OF_DOCUMENT_TOKEN_TO_BE_REPLACED

With at least five competing cannabis legalization bills in play this session in Maryland, the state’s Senate president weighed in on Friday about...

END_OF_DOCUMENT_TOKEN_TO_BE_REPLACED

Shelled hemp seeds—a great source of nutrients and high-quality protein—are on the menu in a new appetizer available at Papa John’s in certai...

END_OF_DOCUMENT_TOKEN_TO_BE_REPLACED

Pet health has experienced an enormous boom in the cannabis industry. Numerous companies have unleashed hundreds of CBD pet health products a...

END_OF_DOCUMENT_TOKEN_TO_BE_REPLACED

A Democratic lawmaker in Florida wants medical cannabis patients in the state to have easier access to the treatment. That is one of the g...

END_OF_DOCUMENT_TOKEN_TO_BE_REPLACED

The Texas Supreme Court has agreed to hear a case challenging the state’s ban on smokable hemp and has scheduled oral arguments for early nex...

END_OF_DOCUMENT_TOKEN_TO_BE_REPLACED

The Texas Supreme Court has decided to take up the smokable hemp ban case from the decision of a district court that had ruled the Department...

END_OF_DOCUMENT_TOKEN_TO_BE_REPLACED

Hemp companies in Texas are vowing to fight a ruling that health officials announced last week, declaring that delta-8 THC is a Schedule I co...

END_OF_DOCUMENT_TOKEN_TO_BE_REPLACED

Jesse Williams is a retired Navy veteran with a background in nuclear power propulsion plants, graphic design, and mass...

END_OF_DOCUMENT_TOKEN_TO_BE_REPLACED

Texas Medical Cannabis Prescriptions Online.
Relief, relaxation, and rejuvenation are a prescription away.